Jekyll is a static site generator, typically used for personal websites and blogs.

The link above contains documentation on getting started using the default theme.

Jekyll lets you write your site in Markdown which is output into HTML and CSS.

The HTML and CSS files are generated in _site via the command jekyll build.

Once your website’s content has been built into _site, a web server can serve the files in _site to web browsers.

First though, you probably want to run your site locally:

If you navigate in a browser to localhost:4000, you should be able to view your site.

But how to let anyone with an internet connection view your site?

You have to deploy your site to a (production) server.

There are different ways to do this. We will discuss some of them in the remainder of this post.

You FTP the contents of _site into the document root of your server, e.g. /usr/share/nginx/html for Nginx or /var/www/html for Apache.

Conceptually, this is probably the simplest approach: 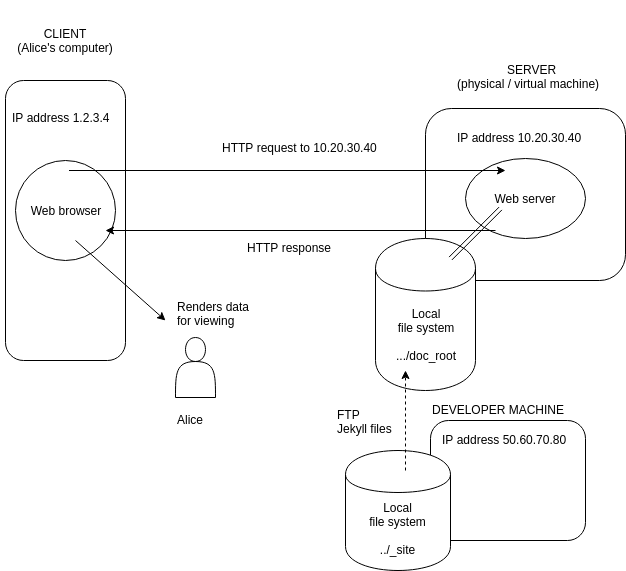 And it is difficult to:

This list is far from exhaustive. Further, such problems will typically get worse developing more complex applications.

Containerisation allows you to isolate all the software and associated configuration required to run your application from the hardware hosting it and any other software running on the host.

It can be used to modularise parts of the deployment process.

It allows you to switch hardware or cloud technology more easily, e.g. from Amazon EC2 to Google Compute Engine.

The most popular container technology at the time of writing is Docker (see here for a simple use case of Docker).

We bundle our web server and the files it serves together into a container.

This translates into the following Dockerfile

which is turned into a Docker image via docker build.

The image can then be run on the host via docker run, exposing our Jekyll site to the internet.

Suppose you have several developers working on the same project which has a main branch (typically called master or develop).

After a developer has finished working on a bug fix or feature, they request for their copy of the code to be integrated into the main branch. The code is reviewed and modified if necessary, before becoming production-ready.

However, by this time the main branch has changed as other developers in the team have integrated their work.

As a result, the developer might have to resolve merge conflicts, refactor, or, in extreme cases, take a different approach altogether and start over.

Collectively, these problems are known as “integration hell”.

One outcome of “integration hell” is the developer spending more time changing their code at the point of integration than completing the original task.

In an ideal world, a developer “continously” integrates their code into the main branch as they make their changes.

In reality, continuous integration means taking measures to ensure the time taken for a developer to implement production-ready changes is short.

a) Giving developers more, but smaller, tasks, e.g. breaking up a large task into smaller ones

A common technique for b) is to have a temporary build server spin up, e.g. CircleCI each time code is committed to a Git hosting provider, e.g. Github.

We are going to assume you have a Github account containing a repository for your Jekyll website and have completed the Github-CircleCI integration.

Create a .circleci directory in the project root.

config.yml is parsed by CircleCI each time a commit is pushed to Github and contains the configuration and instructions for our temporary build server.

YAML is a superset of JSON. Here is a guide to YAML basics.

To keep things simple, we aren’t going to worry about automated tests or linting, only that Jekyll can build our website.

In CircleCI terms, this means we will have one workflow consisting of one job. The job will output our site’s HTML and CSS files into _site.

and in our project root, build-jekyll.sh

Now, the next time you push changes to your Jekyll repository in Github, this will trigger a build in CircleCI.

In CircleCI, you should be able to see this build and its progress as it executes the instructions in config.yml.

We saw above how CircleCI runs automated checks to ensure software quality each time changes are pushed up to a repository. This was part of continuous integration.

If the checks fail, the developer responsible can make the necessary changes in order for the checks to pass.

If the checks pass, and the changes pass code review, they can be integrated into the main branch.

However, often the new release of the software will be first mocked in an environment identical (or very similar to) the production environment. This environment is typically called staging.

If this step is done manually, there will be a non-negligible delay between the time of integration into the main branch and the new release.

If it is done automatically, i.e. integration into the main branch triggers a sequence of actions leading to a new release of the software in staging, this is continuous delivery.

If it is done automatically and the new release is in production, this is continuous deployment.

In Part 2, we will see how we can integrate CircleCI with Google Cloud Platform to achieve continuous deployment for our Jekyll site.

In doing so, we will use containerisation in conjunction with Kubernetes, a container orchestration / management system.